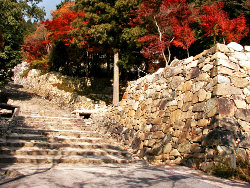 安土城
Azuchi Castle is classified as a hilltop castle, and is located in Shiga Prefecture. During the pre-modern age, it found itself within the borders of Ōmi Province. It is associated with the Oda clan. Dates in use: 1576 - 1585.

Ruins Kansai Region Ōmi Province
Oda Nobunaga completed building this magnificent castle as a symbol of his wealth and power in 1579. Many innovations were incorporated in its construction and is considered a turning point in the way castles were built. Sadly, it stood for just three years before being burnt to the ground.

There were many reasons that made Azuchi castle special. It represented a shift in not only the way Japanese castles were built but also how they were utilised. Azuchi castle in particular was a work of art that was decorated with gold & the works of master painters. It stood for just three years.