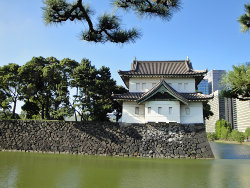 江戸城
Edo Castle is classified as a flatland castle (its layout: Kakakushiki), and is located in Tōkyō. During the pre-modern age, it found itself within the borders of Musashi Province. It is associated with the Tokugawa clan. Dates in use: 1457 - 1868.

Buildings Kantō Region Musashi Province
This was once the largest castle on Earth. It was home to the Shogun's who ruled Japan during the Edo period. Now just a few gates, turrets & guardhouses remain in addition to the extensive walls & moats. Throughout its entire history fires & bombing during WWII have seen the loss of the majority of the original buildings.