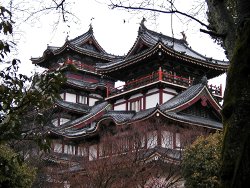 伏見城
Fushimi Castle is classified as a hilltop castle (its layout: Teikakushiki), and is located in Kyōto. During the pre-modern age, it found itself within the borders of Yamashiro Province. It is associated with the Toyotomi clan. Dates in use: 1592 - 1623.

Reconstructed Kansai Region Yamashiro Province
This castle was intended to be Toyotomi Hideyoshi's place of retirement but an earthquake just 2 years after it was completed reduced it to rubble. A new one was built in its place but he died before its completion.

After Hideyoshi's death, possession of the castle went to Torii Mototada, a vassal of the Tokugawa. A short time later the samurai of Japan were divided into two major factions, those aligned with the Toyotomi & those aligned with the Tokugawa. Just before the battle of Sekigahara where these two factions would face off, Ishida Mitsunari's armies were delayed here 11 days giving the Tokugawa time to prepare for the battle, a battle they ultimately won.