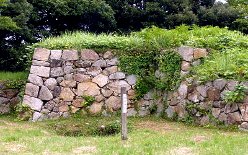 月山富田城
Gassan Toda Castle is classified as a mountain castle, and is located in Shimane Prefecture. During the pre-modern age, it found itself within the borders of Izumo Province. It is associated with the Amako, Mōri clans. Dates in use: 1395 - 1611.

Ruins Chūgoku Region Izumo Province
Considered one of the five great mountain castles of the Sengoku period. Certainly it's scale was great but what was the ingredient that allowed it to prosper in that hostile environment? This was a time before massive moats and unscaleable walls like those of Osaka castle. What protected this castle for 100's of years was the natural defenses its location offered which made it difficult for attacking armies.