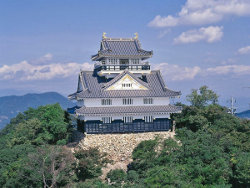 岐阜城
Gifu Castle is classified as a mountain castle, and is located in Gifu Prefecture. During the pre-modern age, it found itself within the borders of Mino Province. It is associated with the Saitō, Oda clans. Dates in use: 1201 - 1600.

Reconstructed Chūbu Region Mino Province
Prior to Oda Nobunaga attacking & taking control of this castle, it was named Inabayama castle & was in the possession of the Saito clan. Conflicts within the Saito clan weakened the defenses of this castle and helped contribute to an Oda victory. The castle was then renovated by Nobunaga but was later reduced to rubble after the battle of Sekigahara. The ruins were further damaged in 1943 by bombing.