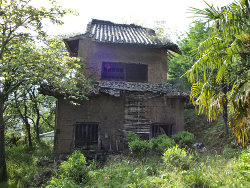 日出城
Hiji Castle is classified as a hilltop castle (its layout: Teikakushiki), and is located in Ōita Prefecture. During the pre-modern age, it found itself within the borders of Bungo Province. It is associated with the Kinoshita clan. Dates in use: 1602 - 1874.

Buildings Kyūshū Region Bungo Province
It is highly unusual for any clan to maintain possession of a castle throughout the 250 years or so of the Edo period. But, that is exactly what the Kinoshita clan managed to do. When the small Hiji castle was completed, it consisted of a three-story main tower, five two-story turrets & one one-story turret.The sole remaining turret, the Kimon Turret, is the most neglected building that I've seen still standing.

The Kimon Turret has a unique design. The north-west corner of the turret has been chopped off at 45°. This has been done to stop Ogres & Demons (and misfortune) from entering the castle.

After being relocated, the Kimon Turret had been used as a house and if you poke your head through one of the many gaping holes in its walls, you can see lots of rubbish & old furniture. Its current condition is extremely poor as can be seen by the pictures. The only other remaining structure, the Omote Gate, was transferred to the Ryusenji Shrine.

The castle is also widely known as Yokoku Castle.