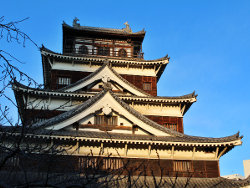 広島城
Hiroshima Castle is classified as a flatland castle (its layout: Rinkakushiki), and is located in Hiroshima Prefecture. During the pre-modern age, it found itself within the borders of Aki Province. It is associated with the Mōri, Asano clans. Dates in use: 1589 - 1874.

Reconstructed Chūgoku Region Aki Province
The castle was completely destroyed in WWII with the current main tower being a concrete reconstruction. Some supporting buildings have been rebuilt using traditional methods in recent years.

Mōri Terumoto, one of five samurai entrusted with ruling Japan after Toyomomi Hideyoshi's death, built this castle in 1591. In the battle of Sekigahara Terumoto, having sided with the losing side, had his lands greatly reduced and was forced to leave this castle for Hagi castle.