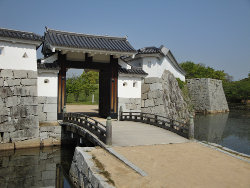 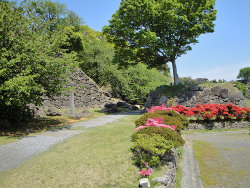 肥前名護屋城
Hizen Nagoya Castle is classified as a hilltop castle (its layout: Teikakushiki), and is located in Saga Prefecture. During the pre-modern age, it found itself within the borders of Hizen Province. It is associated with the Toyotomi clan. Dates in use: 1591 - 1598.

Ruins Kyūshū Region Hizen Province
This castle is unique in Japan in that it served as a base to attack foreign lands. Toyotomi Hideyoshi had his sights not only on Korea but also China. These castle ruins are the largest remaining ruins from the Momoyama period with several well-defined enclosures remaining intact.

After Hideyoshi's death, plans for domination of Korea & China were scrapped, as was this castle. Hizen Nagoya castle was dismantled & used to construct Karatsu castle. Also the steel gates of Nagoya castle were moved to Sendai castle but were destroyed during World War II.