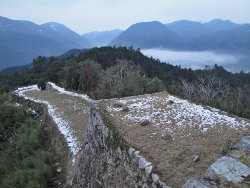 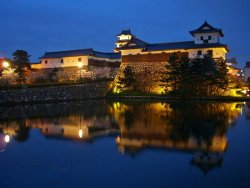 今治城
Imabari Castle is classified as a flatland castle (its layout: Rinkakushiki), and is located in Ehime Prefecture. During the pre-modern age, it found itself within the borders of Iyo Province. It is associated with the Tōdō clan. Dates in use: 1602 - 1873.

Reconstructed Shikoku Region Iyo Province
Tōdō Takatora came to the area following the Battle of Sekigahara, as ordered by the battle's victor, Tokugawa Ieyasu. At that time, the major castle in the area was Kokufu castle which sat atop Mt. Karako. Common at the dawn of the 17th century was to abandon these smaller, difficult-to-access castles and build larger castles, closer to populated centers. That was exactly what happened at Imabari.

Takatora completed the castle is a very short time, but just two years after it was completed, the main tower was dismantled & transferred to Kameyama castle near Kyoto. Takatora's son, , was left behind to manage the fief on an income of 20,000 Koku.

As stated, this castle can be categorised as a flatland castle. But, being built by the sea & with the moats being fed by the tides, it can also considered to be a water castle. This castle, along with Takamatsu & Nakatsu, make up the Top three Water castles of Japan.