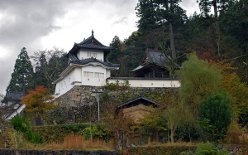 出石城
Izushi Castle is classified as a hilltop castle, and is located in Hyōgo Prefecture. During the pre-modern age, it found itself within the borders of Tajima Province. It is associated with the Koide, Sengoku clans. Dates in use: 1604 - 1868.

Buildings Kansai Region Tajima Province
Izushi Castle was built in a time of peace but the two previous castles that protected these environs were laid siege to & defeated by the armies of Toyotomi Hideyoshi in 1569 & again in 1580. The second castle was built atop Mt. Ariko & this castle, Izushi, was built at its base.

Like so many other castles, upon being decommissioned at the close of the Edo period, buildings were demolished & the castle grounds were opened to the public. These castle ruins remain today as a popular spot during cherry blossom season.