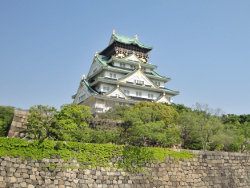 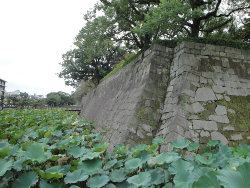 鶴丸城
Tsurumaru Castle is classified as a hilltop castle, and is located in Kagoshima Prefecture. During the pre-modern age, it found itself within the borders of Satsuma Province. It is associated with the Shimazu clan. Dates in use: 1601 - 1872.

The Shimazu clan of Satsuma were reluctant to provoke the Tokugawa Shogunate since opposing & losing to them in the Battle of Sekigahara. Some attribute the defensively weak design of Tsurumaru castle as a deliberate attempt to sooth these frayed relations.

The Shimazu lands were dotted with over 100 small forts that seemed to fly in the face of a law enacted in 1615 limiting each domain to just one castle. It is said their collective defensive strength ensuring the protection of the domain.

This castle was the site of the Battle of Shiroyama, which saw the death of the last samurai, Saigō Takamori, and the end of the Seinan Rebellion.