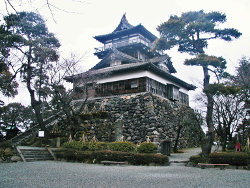 丸岡城
Maruoka Castle is classified as a hilltop castle (its layout: Renkakushiki), and is located in Fukui Prefecture. During the pre-modern age, it found itself within the borders of Echizen Province. It is associated with the Shibata clan. Dates in use: 1576 - 1871.

Original Chūbu Region Echizen Province
This castle is quite the survivor. It is Japan's oldest castle & while it lacks the grandeur of Japan's other original castles, it is quite an interesting specimen. One unique aspect of this castle is its stone-tiled roof which even includes the ornamental Shachi-hoko. Unfortunately, the main tower collapsed during an earthquake in 1948 but was rebuilt 7 years later using much of its original materials.

This is another surviving artifact of Maruoka castle. It is the Akazu Gate which has been relocated several kilometres to the south-east.