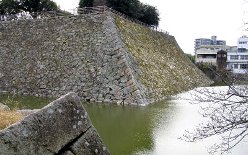 三原城
Mihara Castle is classified as a flatland castle (its layout: Teikakushiki), and is located in Hiroshima Prefecture. During the pre-modern age, it found itself within the borders of Bingo Province. It is associated with the Kobayakawa, Asano clans. Dates in use: 1567 - 1871.

Ruins Chūgoku Region Bingo Province
A tragedy has taken place here. Despite having been awarded National Historic Site status, the site wasn't protected from train tracks being laid atop what remained. Anyway, this was an interesting little castle which was made of small, connected islands. Land reclamation has seen the ocean retreat several kilometres.

Just three buildings relating to the castle have managed to escape destruction, all are gates. Two gates remain in Mihara city but were moved away from the castle. The remaining gate was relocated South to a small island in Japan's inland sea.