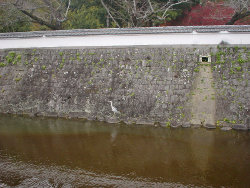 月隈城
Tsukikuma Castle is classified as a hilltop castle, and is located in Ōita Prefecture. During the pre-modern age, it found itself within the borders of Bungo Province. It is associated with the Ogawamitsu, Ishikawa clans. Dates in use: 1601 - 1639.

Ruins Kyūshū Region Bungo Province
As you make your way toward the top of the hill, you'll find yourself walking past numerous holes that have been bored into the sides of the hill. These holes were actually used to store human remains. Aside from the moated area & the bases of two turrets, little stonework remains.

This castle consisted of three enclosures. The main enclosure was naturally located at the top of the hill, the secondary enclosure half-way up the hill & the third enclosure at the base of the hill. There were two southern entrances to the third enclosure. Approximately three-quarters of the surrounding moat was water-filled, the remaining section was dry.