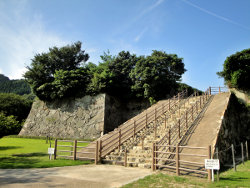 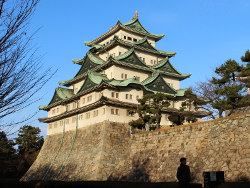 名古屋城
Nagoya Castle is classified as a flatland castle (its layout: Teikakushiki), and is located in Aichi Prefecture. During the pre-modern age, it found itself within the borders of Owari Province. It is associated with the Tokugawa clan. Dates in use: 1609 - 1871.

Reconstructed Chūbu Region Owari Province
Nagoya castle was built for the dual purposes of guarding against any threat emanating from Ōsaka and also to secure a section of the Tōkaidō, the main link between the capital of Edo & Kyōto. Being established in 1612 made it one of the last major castles to be built. The founding Daimyō was Tokugawa Ieyasu's ninth son who established the Owari line of the Tokugawa clan.

The current tower dates from 1959 and was built using concrete. Despite the modern building materials used, the exterior remains faithful to the original tower. Adorning the highest points of the reconstructed tower are two dragon-headed fish known as Shachi. They are a well-known symbol of the castle and are mode from gold-plated, copper sheet. The interior houses an exhibition of items relating to its past.

Nagoya was a heavily targeted site in WWII. That being the case it's little wonder the major buildings of Nagoya castle went down in flames during the war. A handful of structures did manage to escape the bombing of WWII, those being three, three-story turrets & three gates.