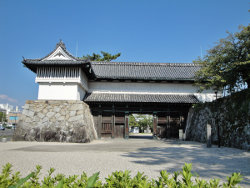 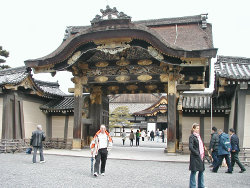 二条城
Nijō Castle is classified as a flatland castle, and is located in Kyōto. During the pre-modern age, it found itself within the borders of Yamashiro Province. It is associated with the Tokugawa clan. Dates in use: 1603 - 1871.

Buildings Kansai Region Yamashiro Province
The main tower has long since burnt down but the Ni-no-maru palace's carvings, paintings & surrounding garden have earned it World Heritage listing. The defences, while impressive looking, would never have withstood any real assault. It's role was never that of stronghold but instead as a symbol of the Tokugawa's power & authority.

The Ni-no-maru palace is without a doubt the main attraction of Nijō Castle and can be described as a work of art in itself. The walls & sliding doors are decorated by the paintings of masters & the amazing carved panels above the doors made from 35-centimeter-thick blocks of cypress.

The palace consists of five connected buildings, and the more important the guest, the more access they were afforded. The fifth building however, was reserved for the Shōgun himself & his female attendants who were, no doubt forced to endure mediocre Karaoke & lengthy games of rock-paper-scissors.