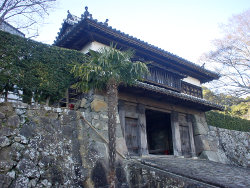 佐伯城
Saiki Castle is classified as a hilltop castle (its layout: Renkakushiki), and is located in Ōita Prefecture. During the pre-modern age, it found itself within the borders of Bungo Province. It is associated with the Mōri clan. Dates in use: 1606 - 1871.

Buildings Kyūshū Region Bungo Province
When Mōri Takamasa came here from his lands in Hita to the west, he had Togamure castle built. It was soon realised that its location was unsuitable for the administration of the domain & a new castle was built atop Mt. Hachiman. The castle's name at that time was Tsuruya Castle but in modern times it is more commonly known as Saiki Castle. Originally there were five multi-storied turrets, one single-storied turret & seven gates.

The stonework of the Hon-maru, Kita-no-maru & Nishi-no-maru remain in very good condition. The bases of all turrets & gates are still clearly visible. At the base of the mountain is The San-no-maru gate. The gate is rather large & was originally built in the Edo period.