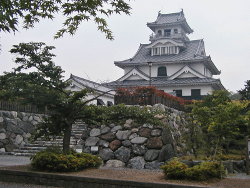 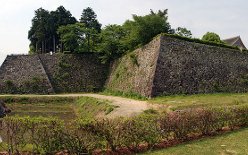 篠山城
Sasayama Castle is classified as a hilltop castle (its layout: Rinkakushiki), and is located in Hyōgo Prefecture. During the pre-modern age, it found itself within the borders of Tanba Province. It is associated with the Matsudaira (Katahachi), Aoyama clans. Dates in use: 1609 - 1871.

Buildings Kansai Region Tanba Province
Sasayama Castle is yet another example of stone foundations being built for a main tower yet no tower ever being built. Nearby Akashi castle, though built a little later, shared the same fate. Why was this? Tokugawa Ieyasu himself declared these castles to be sufficiently strong without a Tenshu & too big a threat with one.

Twenty Daimyō from 15 provinces were ordered to assist in the castle's construction. The designing of the castle was left to one of the greats of castle construction, Tōdō Takatora.