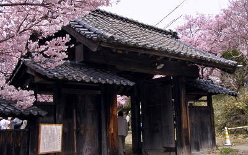 高遠城
Takatō Castle is classified as a hilltop castle, and is located in Nagano Prefecture. During the pre-modern age, it found itself within the borders of Shinano Province. It is associated with the Takeda, Naitō clans. Dates in use: 1547 - 1872.

Buildings Chūbu Region Shinano Province
A mis-matched pair of gates & what would have to be the cutest turret in the history of Japanese castles in conjunction with the remaining moats & enclosures provide a very popular spot for cherry blossom viewing. Several original gates have survived but have been relocated off-site. The Ote gate has made its way back to the castle though, albeit in an altered form.