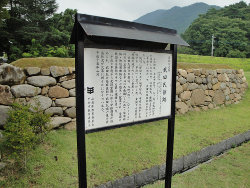 躑躅ヶ崎館
Tsutsujigasaki Yakata is classified as a flatland castle (its layout: Renkakushiki), and is located in Yamanashi Prefecture. During the pre-modern age, it found itself within the borders of Kai Province. It is associated with the Takeda clan. Dates in use: 1519 - 1594.

Ruins Chūbu Region Kai Province
Known as either the Tsutsujigasaki Yakata or the Takedashi Yakata, it was an extremely well fortified complex but never actually classified as a castle. But, the thing that really puts this place on the map, is that is was home to to one of the most famous samurai clans of the Sengoku period, the Takeda.

The following quote has been attributed to Takeda Shingen: 「人は城 人は石垣 人は堀 情けは味方 仇は敵なり」- "The people are your castle, your stone walls, your moat. Protect them, and they shall protect you." In spite these words, it seems Shingen himself left little to chance. Just 2km to the North-East, sit the ruins of Yōgaiyama castle, a site they could retreat to in times of war. It was in fact at Yōgaiyama castle where Shingen was born.

Today, little remains beyond the water-filled moats & some rather minor stonework. At the centre of the site stands the Takeda shrine. To the right of the shrine is the Takeda clan museum, which oddly is being guarded by a stone, Hello Kitty statue.