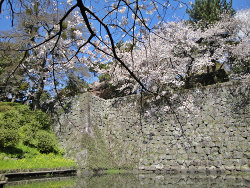 臼杵城
Usuki Castle is classified as a hilltop castle, and is located in Ōita Prefecture. During the pre-modern age, it found itself within the borders of Bungo Province. It is associated with the Ōtomo, Inaba clans. Dates in use: 1562 - 1873.

Buildings Kyūshū Region Bungo Province
Ōtomo Sōrin built this castle on what was a small oval-shaped island that touched the coastline at just one point. The site was chosen as it offered good position to better defend against his enemies. The island has long since been swallowed up by land reclamation followed by the city of Usuki itself. The two surviving Edo period turrets are complimented by the rebuilt Daimon Turret.

Some mystery still surrounds the structure & appearance of the main tower. However, based on research, it is believed to have been a three-layer, four-story tower, 12 meters in height. It was connected to the Tsuke Turret by a series of two-story, hall-like turrets.

There is plenty to see in the castle town too. Several streets present beautifully preserved shops, houses & temples. And beyond these few streets are countless more crumbling storehouses awaiting restoration.