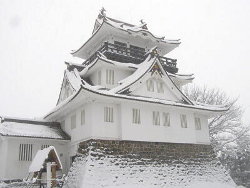 横手城
Yokote Castle is classified as a hilltop castle, and is located in Akita Prefecture. During the pre-modern age, it found itself within the borders of Dewa Province. It is associated with the Onodera, Tomura clans. Dates in use: 1554 - 1868.

Reconstructed Tōhoku Region Dewa Province
Only ever a small-scale castle, it consisted of little more than the Honmaru (main enclosure) & the secondary, Ninomaru. The Onodera clan did build up the castle in the mid 1500's but it is believed fortifications had existed for hundreds of years before this.