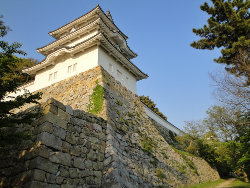 明石城
Akashi Castle is classified as a hilltop castle, and is located in Hyōgo Prefecture. During the pre-modern age, it found itself within the borders of Harima Province. It is associated with the Ogasawara, Matsudaira (Echizen) clans. Dates in use: 1619 - 1874.

Buildings Kansai Region Harima Province
This was one of many castles in the area, either constructed or expanded upon, to defend against those who posed a threat to the Tokugawa shogunate. Utilising raw materials and even whole buildings from castles that had been decommissioned in 1615, allowed it to be built in an incredibly short amount of time.

The base of a central tower does exist though nothing ever stood there. Instead the main enclosure was defended by 4 three-story towers, two of which still stand. The central tower base is located to the West, just behind the Hitsujisaru turret.

Though there are several visible differences in the two remaining towers of Akashi castle, they are very similar in style & dimensions. What is surprising is that both towers had very different origins. The Hisujisaru Turret made its way here via Fushimi castle and the Tatsumi Turret was relocated here via Funage castle. The Funage castle ruins are actually located within short distance to the West of Akashi castle.