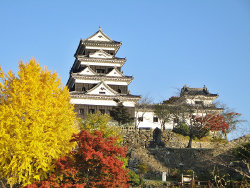 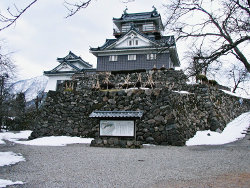 越前大野城
Echizen Ōno Castle is classified as a mountain castle (its layout: Teikakushiki), and is located in Fukui Prefecture. During the pre-modern age, it found itself within the borders of Echizen Province. It is associated with the Matsudaira, Doi clans. Dates in use: 1576-1871.

Reconstructed Chūbu Region Echizen Province
Oda Nobunaga awarded the Kanamori clan land here in 1575. Ownership then passed to the Echizen branch of the Matsudaira clan then finally onto the Doi clan. The Tenshu possessed a major and minor towers, both were twin layered but the larger had three internal levels. The smaller tower was known as the Tengu Turret.

Echizen Ōno Castle is a ways off the beaten track, this is highlighted by the fact that public transport to and from the town aren't too regular. The castle can be seen from the train station so is within walking distance.

As is often the case with castles that were decommissioned after the close of Japan's feudal era, buildings & materials that could be reused, were. In Ōno castle's case, two gates were transferred to temples & have survived to the present day. A turret-topped gate, now located at the Kōmyō temple was severely damaged in 1948 and has since been repaired. One other gate, a small, Yakui-style gate, can also be found at yet another local temple. It is believed that both gates were built around in or around 1828.