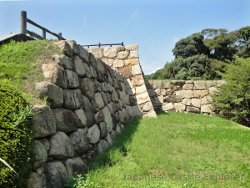 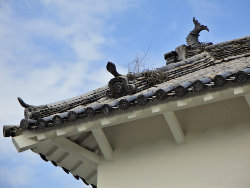 府内城
Funai Castle is classified as a flatland castle (its layout: Teikakushiki), and is located in Ōita Prefecture. During the pre-modern age, it found itself within the borders of Bungo Province. It is associated with the Ōtomo, Takenaka clans. Dates in use: 1597 - 1872.

Buildings Kyūshū Region Bungo Province
A smaller castle with two original turrets & several other reconstructed structures. A moat circles the ruins. This castle, along with Himeji & Osaka castles, were the only castles to have had an entertainment area where events such as tea ceremony, Noh theatre and moon gazing ceremonies took place.

The Shumon Yagura, the Hitojichi Yagura, walls & moats remain from the Edo period. A number of turrets, a covered bridge & a gate have been reconstructed.