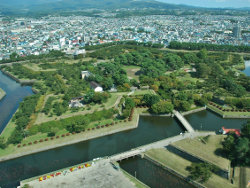 五稜郭
Goryōkaku Fort is classified as a flatland castle (its layout: Bastion), and is located in Hokkaidō. During the pre-modern age, it found itself within the borders of Ezochi Province. It is associated with the Tokugawa clan. Dates in use: 1866 - 1869.

Ruins Hokkaidō Region Ezochi Province
The castle's layout is thus, for it's ability to withstand damage from cannon fire while at the same time allow many cannons to be placed on its walls. Significantly, it is the site of the final battle of the Edo period & of Japan's feudal era.