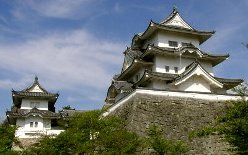 伊賀上野城
Iga Ueno Castle is classified as a hilltop castle (its layout: Teikakushiki), and is located in Mie Prefecture. During the pre-modern age, it found itself within the borders of Iga Province. It is associated with the Tōdō clan. Dates in use: 1585 - 1871.

Reconstructed Kansai Region Iga Province
After the great battle of Sekigahara in 1600, the existing castle was expanded upon by the Tōdō clan to defend against any further uprisings against the Tokugawa Shogunate by those loyal to the Toyotomi clan. The main tower collapsed in 1612 & its reconstruction was deemed unnecessary.