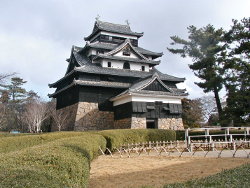 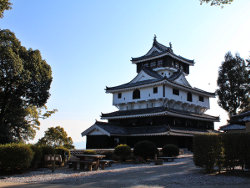 岩国城
Iwakuni Castle is classified as a mountain castle (its layout: Renkakushiki), and is located in Yamaguchi Prefecture. During the pre-modern age, it found itself within the borders of Suō Province. It is associated with the Kikkawa clan. Dates in use: 1601 - 1615.

Reconstructed Chūgoku Region Suō Province
Iwakuni existed as a fully-fledged castle for just 15 years. The Shogunate issued an edict in 1615 limiting this province (and most others) to just one castle. The result of this saw the towers, gates & defensive enclosures at the top of the mountain abandoned. The surrounding lands continued to be administered from the offices at the base of the mountain.

The story of Iwakuni castle's Tenshu of is an interesting one. The main tower, though concrete, was based on the original designs. Interestingly, it was built 30 metres from its original location, on the southern edge of the main enclosure, so as it can be viewed from the city below.

At the base of the mountain and spanning the river is a fascinating bridge called Kintaikyo. It was originally built in 1673 & continues to have sections rebuilt on a regular basis. Only samurai were permitted to cross it but now paying a small fee will qualify you.