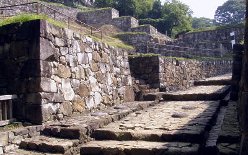 金山城
Kanayama Castle is classified as a mountain castle, and is located in Gunma Prefecture. During the pre-modern age, it found itself within the borders of Kōzuke Province. It is associated with the Iwamatsu clan. Dates in use: 1469 - 1590.

Ruins Kantō Region Kōzuke Province
This castle is recognized as a castle of great significance, both in the Kantō region & nationally. It was also included as one of Japan's top 100 castles. Kanayama Castle proved virtually impossible to capture after numerous attempts to do so failed, such was the strength of its location & design.

Despite its obvious strengths, following the defeat of the Hōjō clan by Toyotomi Hideyoshi, the castle was decommissioned.