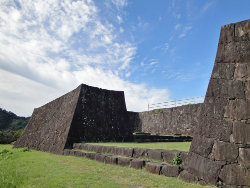 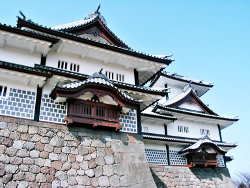 金沢城
Kanazawa Castle is classified as a hilltop castle (its layout: Teikakushiki), and is located in Ishikawa Prefecture. During the pre-modern age, it found itself within the borders of Kaga Province. It is associated with the Maeda clan. Dates in use: 1580 - 1871.

Buildings Chūbu Region Kaga Province
Though Kanazawa castle is a mere shadow of its former self, the remains & recent renovations indicate what an impressive fortress it once was. The extant Ishikawa gate is complimented by a pair of Edo period structures & the Gojukken-nagaya with its attached turrets. Nearby is the famous garden, the Kenroku-en and the spectacular villa, the Seison-kaku.

The Ishikawa Gate is actually a complex of structures known in Japanese as Masugata, meaning square (shaped). This area allowed for defenders to gather or alternatively, could serve as a rock and a hard place for anyone with malevolent intentions. Interestingly, the roof tiles are made of wood encased in lead sheet.

Kanazawa Castle is also noted for the exceptionally wide range of stonework & stone-cutting techniques used in its walls & foundations.