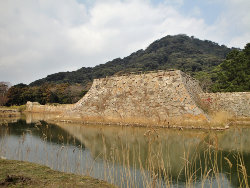 甲府城
Kōfu Castle is classified as a hilltop castle (its layout: Teikakushiki), and is located in Yamanashi Prefecture. During the pre-modern age, it found itself within the borders of Kai Province. It is associated with the Tokugawa clan. Dates in use: 1583 - 1873.

Buildings Chūbu Region Kai Province
A steady stream of lords passed through the Kōfu castle gates as was ordered by the Toyotomi clan, and after 1600, the Tokugawa clan. The turnover rapidly accelerated in 1724 and it became the feudal Japanese castle equivalent of the town bicycle after it came under the direct control of Tokugawa regime.

The grounds of this ruined castle seem to go on & on for ever. Kind of like a movie that would've benefited from a little more editing. Oops, did I say that out loud? Of course the lengthy walls aren't a bad thing, it just gets a bit samey is all.

There is just no gap between the castle & the city that has grown up around it. In fact, a section of the castle seems to have sprouted amongst it. That sprout is the restored Yamanote gate which is located across the train tracks to the North.