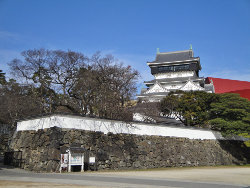 小倉城
Kokura Castle is classified as a flatland castle (its layout: Renkakushiki), and is located in Fukuoka Prefecture. During the pre-modern age, it found itself within the borders of Buzen Province. It is associated with the Hosokawa, Ogasawara clans. Dates in use: 1602 - 1866.

Reconstructed Kyūshū Region Buzen Province
When the castle was rebuilt in 1959, certain embellishments were included in the design that changed how the castle should be classified. The addition of several gables transformed what was a Sōtōgata-type tower - where each level is smaller than the one below it (excluding the upper most level) to a Bōrōgata-type tower - where a watchtower appears to emerge through it's roof.

The upper-most section of the tower, with its overhanging level, represents a highly unusual style of Tenshu. This style is known as Nanban-zukuri & was used in the construction of both Iwakuni & Takamatsu castles.