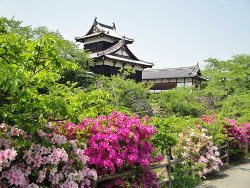 大和郡山城
Yamato Koriyama Castle is classified as a hilltop castle (its layout: Rinkakushiki), and is located in Nara Prefecture. During the pre-modern age, it found itself within the borders of Yamato Province. It is associated with the Tsutsui, Toyotomi, Honda, Yanagisawa clans. Dates in use: 1580 - 1873.

Buildings Kansai Region Yamato Province
Tsutsui Junkei relocated here from nearby Tsutsui Castle in 1580 after defeating his rivals, unfortunately though, Junkei would pass away a short time later. The next person to occupy the castle was Hashiba Hidenaga who not only improved the castle but instituted many local reforms. Koriyama Castle would see out its days in the service of the Yanagisawa clan's Men of Letters.

The remaining moats, towering stonework & overall rustic charm really impress. The grounds are quite extensive with several surprises. Keep an eye out for some re-purposed stonework. There are several historical buildings though none of them were related to castle defence. The turrets & gate date from the 1980's.