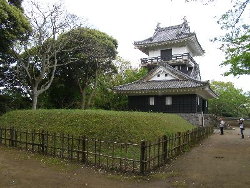 久留里城
Kururi Castle is classified as a mountain castle (its layout: Renkakushiki), and is located in Chiba Prefecture. During the pre-modern age, it found itself within the borders of Kazusa Province. It is associated with the Satomi, Tsuchiya clans. Dates in use: 1456 - 1872.

Reconstructed Kantō Region Kazusa Province
The layout of Kururi castle's fortifications was fairly typical of the earlier Mountain castle. The main enclosure was built on a narrow peak with further enclosures being built on the ridges radiating from its centre. Some of these additional enclosures were separated by dry moats. At this particular castle there existed an additional enclosure at the foot of the mountain which was encircled by a water-filled moat.

As is too often the case, little of the castle has survived to the present day. The most noticeable survivor is the earthen foundations that belonged to the central tower. Sitting next to this is a replica two-layer tower, its design said to be based upon original diagrams.