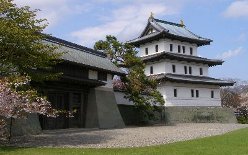 松前城
Matsumae Castle is classified as a flatland castle, and is located in Hokkaidō. During the pre-modern age, it found itself within the borders of Ezochi Province. It is associated with the Matsumae clan. Dates in use: 1849 - 1875.

Reconstructed Hokkaidō Region Ezochi Province
Though fortifications had existed here since 1600, this castle was constructed in the mid 1800's and is noted as the last traditionally built Japanese castle. Matsumae was a frontier castle that defended the Tokugawa Shogunate & its people from the native Ainu and, as it turned out, Russian envoys seeking trade.

The sure-footed Honmaru Gomon Gate is the only structure to have survived intact & unmoved since the Edo period. Another notable (and odd) survivor is the Honmaru Omote Goten Genkan (本丸表御殿玄関) - The entrance of the palace of the main enclosure. On the castle grounds two other gates have been rebuilt. An additional two former castle gates have been relocated nearby.