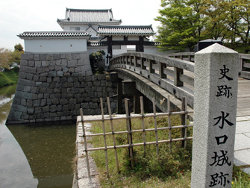 水口城
Minakuchi Castle is classified as a flatland castle, and is located in Shiga Prefecture. During the pre-modern age, it found itself within the borders of Ōmi Province. It is associated with the Katō clan. Dates in use: 1634 - 1873.

Buildings Kansai Region Ōmi Province
The third Tokugawa Shogun, Iemitsu, had this castle built to fulfill a rather specific role. It was to serve as a rest stop when traveling between Kyōto & the capital of Edo. The Shogun actually only stayed there once & even the lords who were stationed here during the life of the castle didn't use the palace but had their lodgings in the second enclosure.