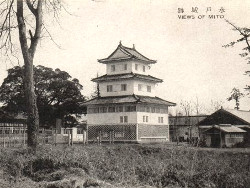 水戸城
Mito Castle is classified as a hilltop castle (its layout: Renkakushiki), and is located in Ibaraki Prefecture. During the pre-modern age, it found itself within the borders of Hitachi Province. It is associated with the Tokugawa clan. Dates in use: 1190 - 1869.

Buildings Kantō Region Hitachi Province
The three branches of the Tokugawa clan were located in Owari (Nagoya Castle), Kii (Wakayama Castle) & Hitachi (Mito Castle), with the main line located in the capital of Edo. Considering the status & incomes of each branch, the castle of Mito was surprisingly simple. There was no twisting maze of towering stone walls for the soldiers to defend from, nor dozens of turrets, nor an imposing main tower. Its three defensive rings were arranged in a row with some two-story turrets dotting the perimeter.

Perhaps unsurprisingly, little has survived to this day. A large Yakui gate links the main enclosure. Prior to the 1980's this gate had had a thatched roof, but due to the on-going expense of maintaining it, it was replaced with copper sheet. Another notable building on the castle grounds is the Kōdō-kan, the former clan school. In the near future we may see an addition to the castle. Rumour has it that money is currently being raised to rebuild the turret-topped gate, the Ōte mon.