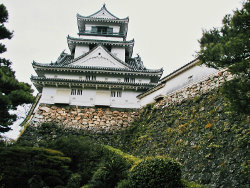 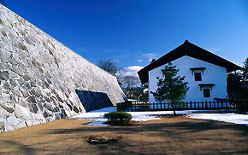 盛岡城
Morioka Castle is classified as a hilltop castle (its layout: Renkakushiki), and is located in Iwate Prefecture. During the pre-modern age, it found itself within the borders of Mutsu Province. It is associated with the Nanbu clan. Dates in use: 1598 - 1871.

Ruins Tōhoku Region Mutsu Province
This castle was built by the Nanbu clan to better control the local waterways. It's white-granite stone walls stand in contrast to other castles in the Tōhoku region where earthen walls are the norm. This is yet another example of a castle built without a Tenshu (main tower). Instead, upon the Tenshidai (main tower foundations), a three-story turret was built.