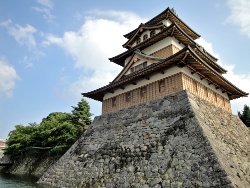 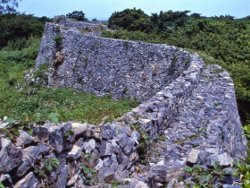 今帰仁城
Nakijin Castle is classified as a mountain castle, and is located in Okinawa Prefecture It is associated with the Haniji clan. Dates in use: 13C - 1665.

Ruins Okinawa Region
This castle has sustained much damage in its long history. In 1416 it fell to the forces of the Central Kingdom. In the early 1600's, a fire raged through the castle. And finally, during WWII, the castle was bombed by the U.S.

Little else remains today apart from the 1500 or so metres of beautifully undulating but roughly cut stone walls.