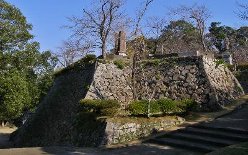 延岡城
Nobeoka Castle is classified as a hilltop castle, and is located in Miyazaki Prefecture. During the pre-modern age, it found itself within the borders of Hyūga Province. It is associated with the Takahashi, Arima, Naitō clans. Dates in use: 1603 - 1870.

Ruins Kyūshū Region Hyūga Province
The small castle of Agata (県城) was built to more conveniently administer the lands of northern Hyūga, now Miyazaki Prefecture. Even following a restoration/expansion of the fortifications in 1653, there was only ever a handful of buildings & gates. The largest building on the site was a three-story turret. It would last just under 30 years before being burnt to the ground in a fire that had spread from the surrounding castle town.

There's a fantastic little story on the Official Nobeoka City website that goes thus: "It is said that if you remove a key stone from the wall, it will fall down and kill as many as one thousand invaders."

The above boast was left untested after Nobeoka castle finally saw its first battle in 1877. The defenders at the time were the forces of Saigō Takamori. They were driven from this place and met their end a short time later on a wooded hill above Kagoshima castle.