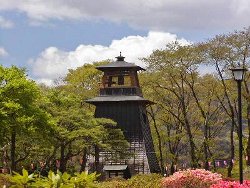 沼田城
Numata Castle is classified as a hilltop castle, and is located in Gunma Prefecture. During the pre-modern age, it found itself within the borders of Kōzuke Province. It is associated with the Numata, Sanada clans. Dates in use: 1532 - 1682.

Buildings Kantō Region Kōzuke Province
Apparently, this castle was regarded as one of the most imposing in all Japan. Whether this opinion was justified or just wishful thinking is hard to judge as little remains from the original construction or subsequent reconstructions. Aside from sections of stone wall, there is the rebuilt Taiko turret & a revered cherry blossom tree called the Goten zakura.

During the Sengoku period, many battles were fought to capture the castle by the Uesugi, Takeda & the Hōjō clans.