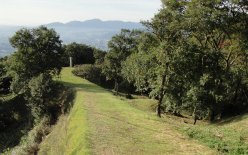 大野城
Ōno Castle is classified as a korean-style mountain castle, and is located in Fukuoka Prefecture. During the pre-modern age, it found itself within the borders of Chikuzen Province. It is associated with the Yamato Court. Dates in use: 663 - ????.

Ruins Kyūshū Region Chikuzen Province
The ruins of Ōnojō represent quite a departure in style when compared to almost every other castle on this website. This probably shouldn't come as too much of a shock given that this castle was built about 1,000 years prior to what was the final boom of purposeful castle construction of the early 1600's.

The defining feature of castles such as Ōnojō, was their relative inaccessibility. Ōnojō's location wasn't exactly remote (being placed over-looking the government centre it was built to protect) but access to the peak would have been difficult and almost impossible to assault. A combination of earthen & stone walls formed a large ring surrounding the peak of Mt. Shiōji. The handful of paths leading to the mountain-top found their way to heavily protected gates. Behind these gates were approximately 70 buildings.

The reason behind the castle's construction has already been briefly mentioned; to protect a government centre. This important political centre was known as Dazaifu and remained relevant for several hundreds of years.