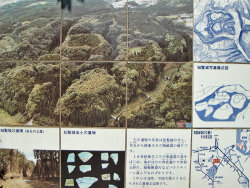 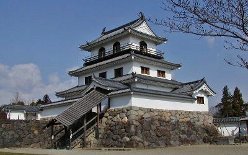 白石城
Shiroishi Castle is classified as a hilltop castle (its layout: Teikakushiki), and is located in Miyagi Prefecture. During the pre-modern age, it found itself within the borders of Mutsu Province. It is associated with the Gamō, Katakura clans. Dates in use: 1591 - 1875.

Reconstructed Tōhoku Region Mutsu Province
Atop the low laying hill where the main tower of Shiroishi Castle stood were four highly protected enclosures. On the side of the hill were a further five fortified enclosures and an additional two enclosures were located across the river.

This castle escaped demolition at a time when domains all over Japan were being limited to just one castle as ordered by the Tokugawa Shogunate.