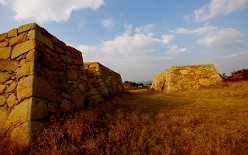 順天倭城
Suncheon Castle is classified as a hilltop castle, and is located in Korea. It is associated with the Toyotomi clan. Dates in use: 1597 - 1598.

Ruins Korea Region
This castle was built by Toyotomi Hideyoshi's generals during his second attempted invasion of Korea. Of the 30 or so castles built by the invading armies, this is one of very few which remain in a high state of preservation.

Originally this castle had twelve gates and six rings of defence. The outermost three baileys were mud walled while the inner three were stone clad. There were three major turrets in all. The largest one occupied the small, square stone base toward the top of the innermost bailey as can be seen on the map.


The siege of Suncheon Castle

Suncheon Castle was the site of the final land-based major confrontation of the failed invasion. The combined Korean & Chinese armies employed a range of siege weapons, which met with limited success. Much more successful was the Korean navy with their Turtle ship based cannons. It was these highly-maneuverable ships that virtually decimated the withdrawing Japanese troops from the Korean peninsular.