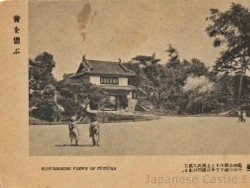 土浦城
Tsuchiura Castle is classified as a flatland castle (its layout: Rinkakushiki), and is located in Ibaraki Prefecture. During the pre-modern age, it found itself within the borders of Hitachi Province. It is associated with the Oda, Fujii, Tsuchiya clans. Dates in use: 1429 - 1873.

Buildings Kantō Region Hitachi Province
Legend has it that fortifications were first built here in the 900's. Whether this is, in fact, true or not cannot be confirmed as no supporting records remain. By the mid 1400's it seems fortifications were indeed established with the following century seeing several battles. Following the battle of Sekigahara, a battle that saw victory for the Tokugawa & their allies, the castle was expanded & improved, bringing it up to modern standards.

Remaining since the mid-1600's is the Taikō Yagura Mon, a humble, yet well-preserved gate. Recent decades has seen efforts made to restore sections of the castle with the rebuilding of the Higashi & Nishi Turrets in addition to the Yakui-styled, Kasumi Mon.