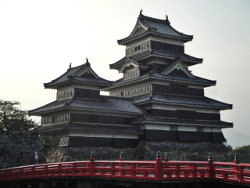 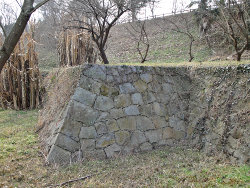 宇土城
Uto Castle is classified as a hilltop castle, and is located in Kumamoto Prefecture. During the pre-modern age, it found itself within the borders of Higo Province. It is associated with the Konishi, Katō clans. Dates in use: 1588 - 1612.

Ruins Kyūshū Region Higo Province
Very little remains of Uto Castle. Today, it is little more than a place for the locals to spend their recreation time. To get to the castle you must first thread the needle through the back streets of Uto. Finally, you're presented with a short & narrow driveway at the end of which is a tiny car park sandwiched between a graveyard & what was once the main enclosure. At one end of the main enclosure is a statue of the castle's founder, Konishi Yukinaga. Perhaps, just over half of the main enclosure's stonework remains.

About one kilometre to the West is the Uto Kojō, the former castle. Some restoration work was going on in a secondary enclosure during my visit. The main enclosure was open & within it were (token) rebuilt structures. The surrounding ditch had been preserved under a layer of concrete.