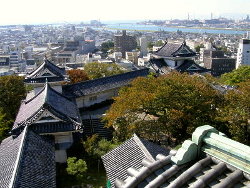 和歌山城
Wakayama Castle is classified as a hilltop castle (its layout: Renkakushiki), and is located in Wakayama Prefecture. During the pre-modern age, it found itself within the borders of Kii Province. It is associated with the Tokugawa clan. Dates in use: 1585 - 1871.

Reconstructed Kansai Region Kii Province
An older castle existed at this site by the name of Ōta castle. When Hideyoshi's armies swept through the Kii peninsular on their mission to unify Japan, the samurai, monks & peasants seeking refuge within the castle found the water levels surrounding the castle on the rise. The reason for this was Hideyoshi had three dams built to flood the castle. Isolated & with no provisions, an heroic but unsuccessful final charge was made by the defenders.

The main tower, turrets & connecting walls enclose the tiny peak of Torafusa. In times past Wakayama Castle was considered one of the top three hilltop castles but WWII brought with it the destruction of the main buildings. Today just two old gates complement this concrete reconstruction.