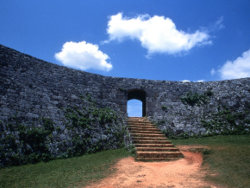 座喜味城
Zakimi Castle is classified as a mountain castle, and is located in Okinawa Prefecture It is associated with the Gosamaru clan. Dates in use: 1422 - 16C.

Ruins Okinawa Region
This castle was built to guard northern Okinawa and features zigzagged stone walls which allowed the defenders a clearer view of attacking soldiers. The archways joining the defensive enclosures feature a keystone whose style is unique to Okinawa.

As the castle was used as a gun placement during WWII, allied forced heavily bombed the site. The U.S. later placed a radar station here. There is a museum nearby.